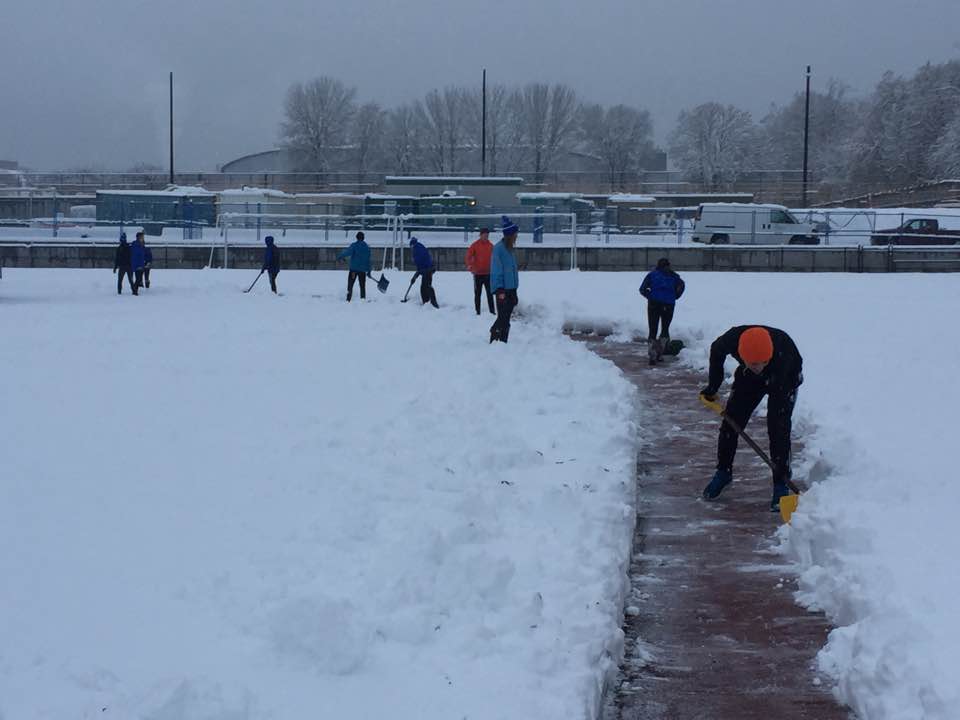 Two races in southwestern British Columbia, including the Vancouver ‘First Half’ Half-Marathon and Sooke River 10K on Vancouver Island, have been cancelled because of poor weather. Environment Canada issued weekend weather warnings predicting upwards of 10-20 cm of snow for the area. According to the Weather Network, the “Vancouver area” had not received snowfall to this past weekend’s extent since 2008.

For some Canadians, this type of weather may just be a regular day. Perhaps not for Vancouver residents who are more accustomed to a milder winter climate.

RELATED: Runner shovels entire lane of the track just to get his workout in.

RELATED: VIDEO: Locals rally to clear snow from golf course ahead of nationals.

The snowfall warning has been lifted as of Sunday morning. On Saturday morning, members of the University of British Columbia track and field team didn’t let mother nature interrupt their weekly weekend workout. A portion of the team deployed shovels and went to work clearing the inner two lanes of the Rashpal Dhillon Track & Field Oval in hopes of getting some safe footing.

Though much of the team didn’t immediately run on the track (there was a local race the same day), the initiative is expected to pay off in the coming days as rain is in the forecast. UBC competed at the Harry Jerome Indoor Games at the Richmond Olympic Oval on Saturday.

Photos of runners taking on the snow in Metro Vancouver

The snow followed us to Vancouver! Making the best out of a cancelled race running along the sea wall. We will get her next time! #FindYourStrong

“The two hardest tests on the spiritual road are the patience to wait for the right moment and the courage not to be disappointed with what we encounter.” ― Paulo Coelho #freedomISO #SauconyCanada @SauconyCanada #RunYVR #RunVan #FindYourStrong

Travelled over 1,000 miles to race the Vancouver First Half Marathon. Sadly, it has been cancelled due to poor weather. Still got out for a run along the seawall and loved every slushy step of it. Can't wait to come back in April and race the Vancouver Sun Run, one of the biggest 10km races in North America. Loved how my @ronhilluk gear kept me warm and dry. #ronhilluk #ronhill #runeveryday #runningroom #seawall #runyvr #runvancouver #vanfirsthalf2017 #vanfirsthalf #winterrun #instarunners #launch4 #brooks @brookscanada #brooksrunningca @brooksrunning @runningroom

Snowmageddon round 2️⃣ ❄️?has hit the city and its resulted in a cancelled race tomorrow! But major kudos to @vanfirsthalf for making our safety your priority!! Managed to slip/plod/waddle around the seawall with these beautiful ladies and some of the @mile2marathon crew ??‍♂️. Glad the palm trees ? seem to be managing the snow ❄️ better than us! ? #run #running #runvan #thesweatlife #theairoutthere #snowmageddon #runlikeagirl #lovetherun #mileschangeyou #vancouver #stanleypark #wtf #snowday

Fun morning in the snow with @runmommaster — lots of laughs on our slow recovery run as we picked our way through the deep snow and fallen trees. #snowmageddon #teamnb #nbrunning #snowcouver

The slush and snow may have put a damper on our racing plans, but we still managed to get out for a snow shuffle this morning – mainly so we could justify @musettecaffe's unreal banana bread. ⠀⠀⠀ ⠀⠀⠀ Although it's unfortunate @vanfirsthalf isn't on tomorrow, a huge thank you to everyone involved in the race & @cityofvancouver for doing everything they could to try and make it work. Your efforts were greatly appreciated!! 2018 is going to be unreal ??⠀⠀⠀ ⠀⠀⠀ #snowwontstopus #snowmageddon #mileschangeyou #ontothenext #mile2marathon

"The greatest of empires, is the empire over one's self." Pubilius Syrus" This was my mantra for the last 3 months since I've started training for @vanfirsthalf with @mile2marathon. During every workout, long run, short run, there was one goal, PB. As of this morning, the race has been canceled due to the amount of snow we received in last couple days. There is absolutely nothing I can do. There are somethings that I can control and there are somethings that I can't control. Mother Nature decided that this year's race is no go. But I just can't stop thinking. Was I capable to put all this work together and manage to make a PB? Was I capable to shut my brain off and cruise in pain cave for 21.2 km? I guess this will have to stay as a mystery until the next one. Thank you so much @coachwatson26.2 @dylanwykes for an amazing training program. It was an absolute joy to be a part of the team. #firsthalfmarathon2017 #pacificroadrunners #mile2marathon

Got a winter running photo? Tag @canadianrunning on Instagram.