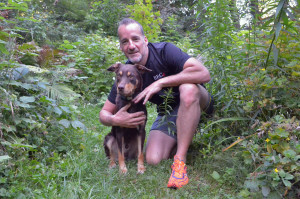 Dave Emilio from the Beaches area of Toronto has possibly the best name a runner can have for his dog. His Australian Kelpie is named Prefontaine, but usually goes by Pre when he needs to be called on the trails, as the long version is a bit of a mouthful.

Like most dog runners that we’ve talked to, ability to run played a role for Dave and his family when deciding on a breed. Dave has run 39 marathons and wanted a dog that could be taken on longer distances.

“Kelpies are herding dogs, they like to work and have lots of energy,” Dave explains, “Pre loves to run and even once I built him up to running 25K with me, he’ll still be pulling ahead of me and willing to do more!” 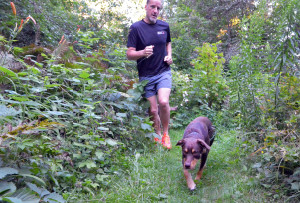 Their favourite route to run together is around a lake up at the Emilio’s cottage, just north of Huntsville, ON. “It sounds silly when you tell people, but I can just tell how happy he is when we’re running and he’s off leash on the trail up there,” Dave says, “We’ll be going up hills and I can tell he’s just thinking, ‘Oh man, this human guy can’t handle this as well as me, I better wait up for him.’

“A couple of times, if I’ve tripped or stumbled, I’ve stayed down to see if he’ll notice. He always does, he runs back all concerned, to “save” me,” Dave laughs, “running off leash at the cottage is definitely a special treat for us, since we can’t do it in Toronto with the number of people on the trails.”