Runners can be pretty particular with their routines and schedules (don’t even think about messing with our Track Tuesdays or Sunday long runs), but if there’s one time when we become even more obsessive, it’s race day. Many runners have one or two (or six or seven) superstitions that they follow on the morning of the race. Some of them are grounded in logic, but others are a little more far-fetched. Do you share any of these race day superstitions?

This seems to be one of the most pervasive superstitions out there, and many runners hold the belief that if they don’t wear their lucky race shirt, or whatever other pieces of clothing that they’ve deemed important, they may as well kiss any possibility of a PB goodbye. No doubt there are many pairs of shorts or singlets out there that have seen a few too many races, so if you’re one of these people, please, for all of our sakes, wash that thing a couple of times before race morning.

We thought lucky underwear deserved its own separate mention because, to be honest, it’s perhaps the grossest. Undergarments can take quite a beating during races, and we can’t help but wonder how many pairs of droopy, hole-filled underwear are out there on the start line. Sorry if we’ve now put that image in your head forever.

For some, it’s less about what they’re wearing and more about the order in which they put it on. There are those who swear fast times can only be run if you put your left sock on before the right, and those who say the opposite order produces a PB. Or maybe you’re a shorts first, shirt second kind of person. Switch the order and you might as well stay home.

In all fairness, this one does make a lot of sense. Race morning isn’t the time to be trying something new, so we’ll give this one to you. Keep in mind, though, that if you’re doing a destination race you may not have access to the exact foods you’re used to, but don’t worry — we’re pretty sure if you eat a different brand of peanut butter nothing bad will happen.

This superstition is for all those long-haired runners out there. ‘Fast braids‘ tend to be a very popular choice for many female runners, while others prefer a ponytail with half a pack of clips to keep everything in place. You know what they say — the tighter the braids the faster the feet (just kidding, we’re pretty sure no one says that). 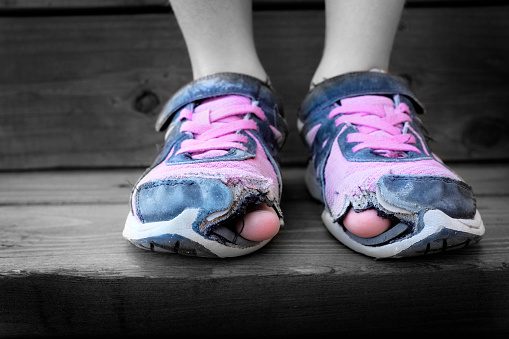 The running community seems to be divided on this one. Some runners swear they have to clean their shoes before race day or else there’s no way they can expect to have a good run, while others PB in their shoes once and never clean them again. Which side are you on?

Some runners believe that if they get an even-numbered race bib, they’re going to have a good day and if not, well, their race is in the hands of fate. To us, this seems like a lot of pressure to put on something you can’t control, but we suppose that’s why they call them superstitions after all…

Have you been using the same four safety pins to attach your bib to your shirt since that first 5K you did in 1995? You’re not alone. If you’re not in this group, don’t even think about asking one of these people if you can borrow one of their pins, unless you want to have their bad race on your conscience.

Many runners have a pre-race warmup that, if they do even one step out of order, they might as well throw in the towel. This could be a specific set of stretches, tying and re-tying their shoes, repeating their race mantra or doing a ritual dance (OK maybe not that last one). Avoiding crossing the finish line before the race starts also seems to be a big deal for a lot of people, although there are a few outliers who make a point of crossing the finish line before the race, which, if we’re being honest, does seem like you’re asking for some bad luck. Why? We don’t know, but hey, we’re clinically insane runners who need to be institutionalized, too.