At age 32, Malindi Elmore retired from professional running after a very successful track career. The runner competed for Canada at the 2004 Olympic Games, the 2006 Commonwealth Games and the 2011 Pan Am Games. She was a 1,500m specialist who ran one of the fastest times ever by a Canadian woman, at 4:02.64. 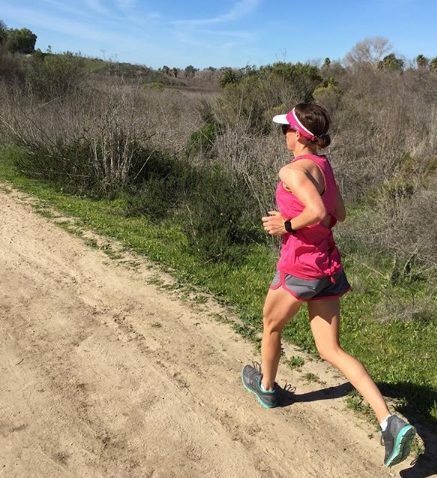 Seven years later, Elmore picked up running for fun and is now dominating the roads, running a 2:32 marathon debut, finishing second at the Canadian 10K championship and winning the Canadian half-marathon championships last month. “Seven years ago I stopped racing. I never dreamed I’d be back at this level,” she says.

So what does this mom-of-two marathon runner eat to stay healthy and fast?

Elmore says, “Wake up time is earlier than I’d like, around 6 a.m.” She eats breakfast around then, which is usually two or three pieces of whole wheat toast with peanut butter and jam and two cups of coffee. “I really like coffee.”

She does either her bigger run or workout between 9 a.m. and 11 a.m. “A workout I did this week was 5x1K with three minutes’ rest at about three minutes per kilometre.”

Elmore will follow up that run with a muffin and apple and another cup of coffee. “I have that snack after my workout, around 11.”

For lunch, Elmore will have a tuna melt. “Usually tuna and cheese on bread with some yogurt.” She also does a second run in the afternoon around 4 p.m., which is usually about 30 minutes long.

For afternoon snack she’ll have crackers with hummus and cheese.

Dinner at the Elmore house is usually around 6 p.m. and consists of some combination of meat, carbs and vegetables. “It’s usually something like salmon, rice and a salad, or fish tacos, or steak and baked potato and grilled vegetables. We cook a lot–actually, my husband cooks a lot.”

“We also always have dessert, whether it’s chocolate or an ice cream sandwich. I’ll also have wine or beer with dinner, not every night, but if I feel like it.”

Before bed, around 9 p.m., Elmore always has a bowl of Cheerios. “I can’t fall asleep when I’m hungry, especially since I’ve been pregnant and nursing. I really need to keep up the calories.”

Elmore recommends runners avoid restricting their diets. “I’ve always eaten more or less the same. I eat as an adult the way I did as a kid, meat and vegetables and dairy and carbs. I don’t restrict and I don’t binge, I’m pretty moderate with everything.”

Up next for the runner is the 2019 Toronto Waterfront Marathon, which doubles as the 2020 Marathon Olympic Trials. “Everything now is pointed toward the marathon, so if I do a race beforehand it’ll be to support that.”