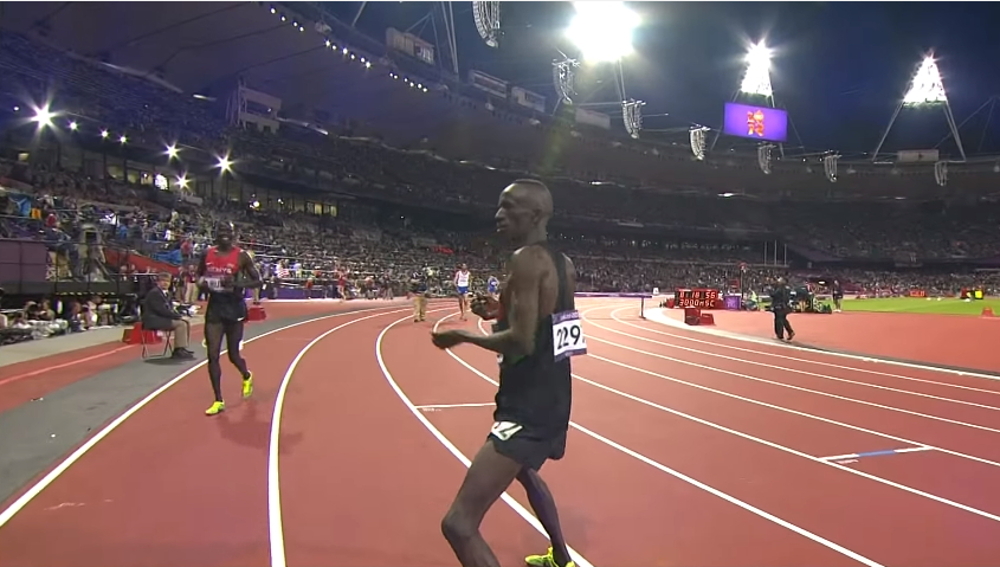 The champion of the men’s 3,000m steeplechase has been defeated in another dramatic race on the track.

As the men took their places on the start line of the track in the Olympic stadium today in Brazil, many in the crowd wondered whether or not we’d see two-time Olympic champion Ezekiel Kemboi’s trademark dance again at the finish line. The London 2012 champion is known as the king of the steeplechase and was a favourite to win gold for Kenya.

Will Ezekiel Kemboi get to dance once more? https://t.co/NRUvjo4UYN pic.twitter.com/4eFcNtVKPQ

It didn’t happen. The event saw a fast pace today as the dominant runners in the distance battled it out on the track. The lead pack flew through the first laps– even at just 1,000m, the pace was already a quick one. The spotlight was on three runners for much of the race as they captured the attention of the crowd with the back and forth as the runners stole the lead spot from each other.

The dominate runners were Kemboi, Conseslus Kipruto (also of Kenya) and America’s Evan Jager. While Kemboi went into the race to defend his Olympic title and with the fastest PB of the trio, it was Kipruto who came in with the strongest seasonal best time: 8:00.12.

Jager took the lead ahead of the two and for a brief while, those watching wondered whether or not he would hold on and defeat both Kenyan runners. He proved today that he can give them a good competition. As he stayed up front, American fans would have questioned whether or not the athlete would bring home a gold in the event for the first time since 1952. That would have made American track history.

However, he wasn’t strong enough to better the speed of Kipruto. Kipruto stole the show in the final lap and he put in a surge on the back bend holding it through to the final stretch. While track fans may have been waiting to see the iconic celebratory dance of Kemboi, they were not without entertainment watching the champion’s rival celebrate his win prematurely as he threw his arms up on the last 100m to excite the crowd even more. He had quite the gap on his Kenyan and American competitor. It was clear the gold medal was his. He surged through not only to be the one to bring the gold to Kenya, but also to set a new Olympic record: 8:03.28.

Jager took the silver medal with his time of 8:04.28– just past Kipruto. Our neighbours to the south will be celebrating that medal as it’s the first one in the event since 1954. In the end, Kemboi still got a medal landing himself in third place but a bronze for him was not expected.

As for the Canadian plot line, Matt Hughes was the one to represent our country who made it through to this round. He has the national title and has proved to be a competitive and confident runner. He did Canada proud today with an eleventh place finish running 8:36.83.