Ideally, when running a marathon, your goal should be to run even splits, i.e. to run the second half of the race in the same time as it took you to run the first half, rather than slowing down. (2018 Boston Marathon champion Des Linden is famous for running perfectly even splits in a lot of her races.) If you’re well trained and everything goes well on race day, you might come close to achieving this; with a few marathons under your belt, you might even try to aim for a negative split, which means running the second half of the race slightly faster than the first. 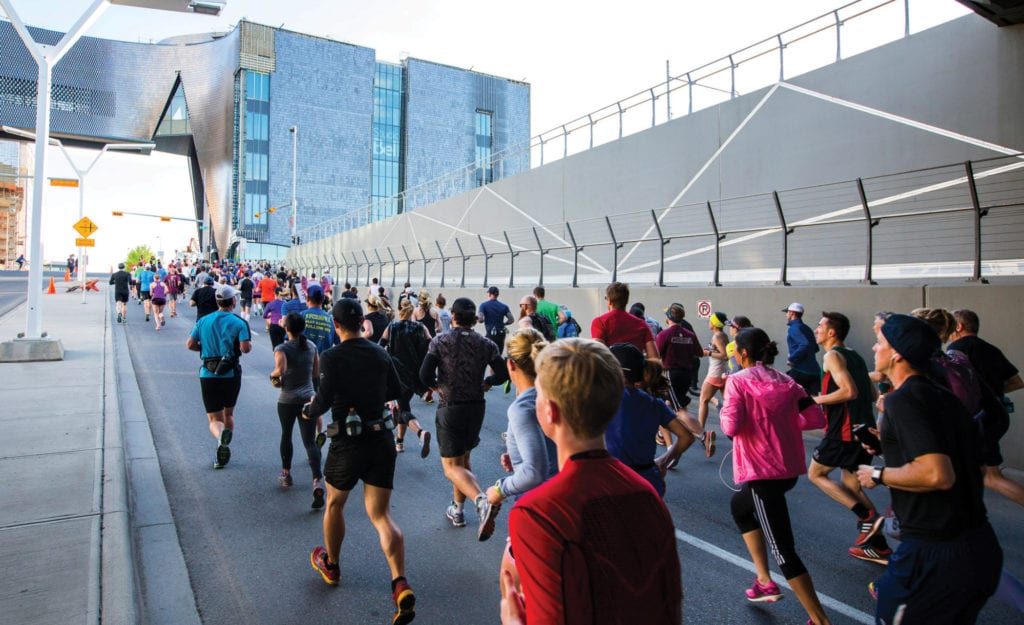 Negative splitting is a challenging proposition for most runners. By 30 km or so (sometimes much earlier), physical and mental fatigue are starting to accumulate, and you might find yourself walking through water stations. Your rate of perceived exertion (RPE) increases with each passing kilometre, and the pace you started at feels harder and harder.

But with a little experience, trying to achieve a negative split can bring a new challenge to your marathons, and there are good reasons to try it.

Andrew McKay of Toronto remembers the second time he qualified for Boston, at the Philadelphia Marathon in 2016. “It was a really bad weather day, and my iPod failed a few kilometres in, so I was just focused on clicking off Ks, and didn’t have high race goals,” he says. “So instead, I focused on my mental game, and doing only what I was capable of on the day. Each time it felt hard, I asked myself ‘is that all you have today?’ And when the answer was no, I pushed a tiny bit harder… My splits were 1:40:18 and 1:39:54, and it was a PB by four minutes, 45 seconds.”

U.S. ultrarunner Nick Coury has written about negative splitting ultras, but the same principles apply in the marathon, or even the half-marathon. (Coury, 34, won the Desert Solstice 24-hour race in Arizona in 2020, with 250 km; his Ultrasignup.com results go back to 2005, which means he’s been racing ultras since he was 17, and he has a slew of podium finishes and victories.) For example, you’re much less likely to “blow up” if you go out a little slower than your goal pace and maintain that through the first half. “The longer the race, the more time there is for something to go wrong,” Coury writes. “Blowing up at mile 22 of a marathon means four miles of suffering … Going out slow enough to negative split means the risk of each individual problem goes down.” He claims that negative splitting has often allowed him to avoid the discouragement and loss of motivation that comes with being unable to maintain his pace late in a race.

A major advantage Coury claims is reduced recovery time: “This has been the biggest mind-blower for me,” he writes. “Even when we feel ‘good,’ we’ve put the body through a lot.” He’s referring to ultras, but the same is true for marathoners. That soreness in your quads the day after a marathon represents muscle damage; but if you’ve ever had a really bad race and ended up walking most of it, you may have noticed you’re hardly sore at all. The fact is that even a slightly slower pace results in less damage, and consequently, less soreness and associated recovery time. Which means you’re ready to resume training earlier, with less fear of losing fitness before starting your next build.

Note that “faster race times” is not one of Coury’s stated reasons to negative split, even though your times might well improve once you master the art of negative splitting. The reasons for doing it are qualitative, rather than quantitative. But you’ll likely find yourself performing better against the competition in races.

To achieve a negative split, you need to plan on running the first half of the race a few seconds per kilometre slower than your goal pace, and then picking up the pace in the second half. This sounds easy, but considering that even running your goal pace will feel very slow during the first half, it actually takes a lot of discipline to run even more slowly than that. Once you pass the halfway mark, hopefully you’re feeling relatively comfortable, and you can begin to gradually increase the pace, keeping something in reserve for a final kick to the finish line. “The more I negative split, the more I just feel straight-up good late in a race,” says Coury.

“The hidden benefit of negative splitting is just how much fun it is,” Coury writes. “It’s hard to describe catching minutes a mile on the front runners in a race 80 per cent in, and doing so without having to dig deep and suffer. I’ve really become addicted to it, and can’t imagine going back to the days of just hanging on to get to the finish line.”

Achieving a negative split takes some practice and patience; you don’t want to slow down so much in the first half that you end up slower than if you just went about racing in your usual manner. (Coury has found 3 per cent to be about right.) Also, your performance will vary depending not only on how well you train, but on how well you recover while training, how much sleep you get, the quality of your nutrition while training, and myriad other factors. But the potential benefits are certainly worth exploring.