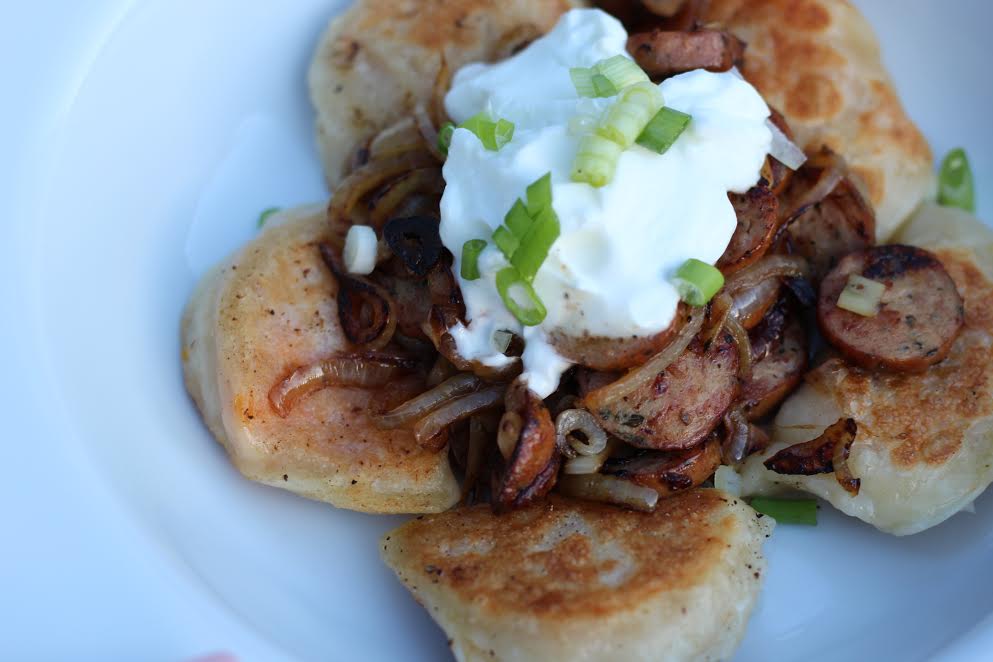 Having driven past a few Ukrainian restaurants recently, I’ve developed a stubborn craving for pierogis. These potato filled morsels, topped with sausage, caramelized onions, sour cream, and chives, were all I needed to tap into whatever Ukrainian ancestry I might have.

Having deemed pierogis too finicky to make, I’ve put off trying to create them from scratch. Then, recently when I had a few hours to kill, I decided to try. I’m so glad that I did. Taking a different filling approach from traditional pierogis, I filled mine with sweet potato, goat cheese, and some spice to kick up the flavour. I then sautéed chicken-thyme sausage and onions and garnished the dish with some plain Greek yogurt and chives. This meal was a hit with everyone who tried it. I will definitely make it again soon.

DIRECTIONS:
1. In a bowl, mix together the flour, sour cream/Greek yogurt, egg, olive oil and salt until the ingredients bind together. Place the dough on a lightly floured surface and knead for a couple minutes, or until smooth. Wrap in plastic wrap and let rest for 30 minutes.
2. While the dough is resting, place the sweet potatoes in a large pot and fill with cold water to cover the potatoes. Bring the water to a boil, then reduce heat to medium-low to simmer for 10-15 minutes or until the sweet potatoes are tender when pierced with a fork.
3. Drain the sweet potatoes and mash in goat cheese and spices. Allow to cool.
4. On a lightly floured surface, roll out the dough to about 1/8-inch thick.
5. Using a round cutter, cut out as many rounds as possible, rerolling the dough until it’s all used. Brush the edges of each round lightly with water, then place one tablespoon of filling on each round. Fold the dough over, making half-moon shapes, pressing and crimping the edges to seal the pierogi.
6. Bring a large pot of salted water to a rolling boil. Cook the pierogi for three to five minutes, or until tender. Drain.
7. Heat two tablespoons of butter in a large skillet over medium heat. Add the pierogi to the skillet with the butter and sear each side for about one minute or until golden. Remove from the pan.
8. Serve immediately garnished with desired toppings.