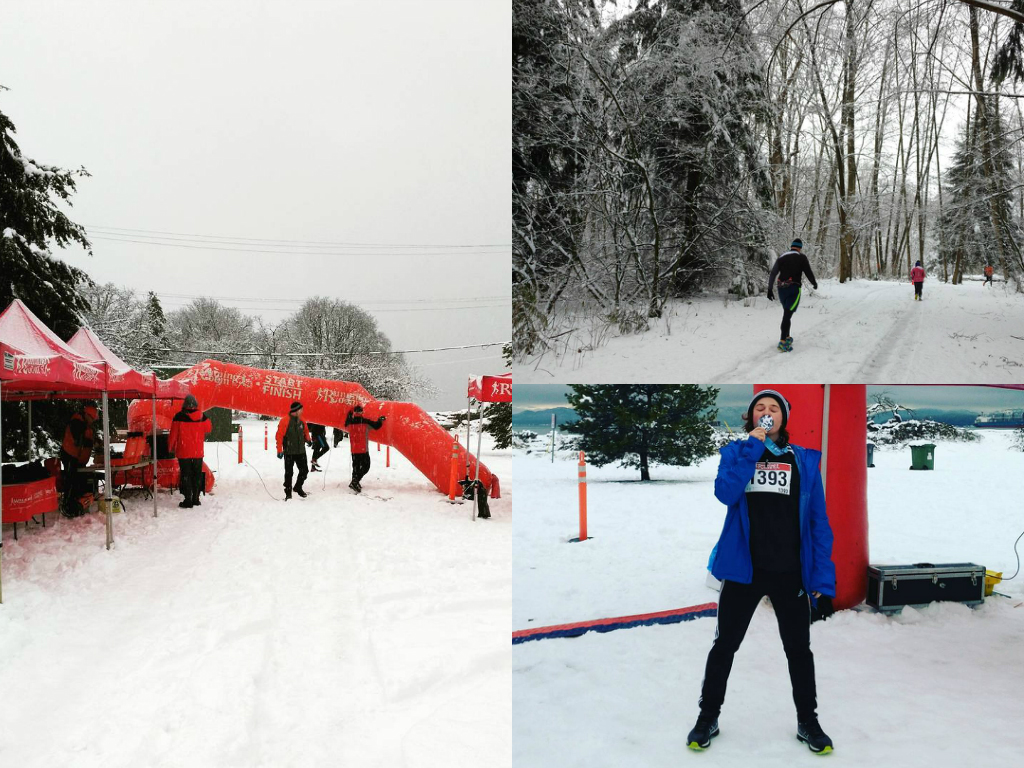 Two races, one in Vancouver and the other on Vancouver Island, were cancelled Sunday because of a weather system that swept through southwestern British Columbia. One weekend race, however, went off as scheduled.

The Hypothermic Half-Marathon in Vancouver, held on Saturday, is all about battling tough winter elements. The race series, put on by the Running Room, includes stops across Canada at various times early in the year. Metro Vancouver received approximately 20 cm of snow this weekend leaving thousands without hydro and interrupting travel and race plans. An estimated 2,000 runners were affected by the Vancouver ‘First Half’ Half-Marathon cancellation with an additional 400 affected at the Sooke River 10K.

According to Daily Hive Vancouver, approximately 70 per cent of the 223 registrants opted to test their physical fitness on Saturday. The event, held at the Jericho Sailing Centre, was held in a different part of the city in comparison to the Vancouver ‘First Half’ Half-Marathon. The race had a two-loop course of Spanish Banks, Locarno Beach and Jericho Beach while the Vancouver First Half was scheduled to be run downtown and in Stanley Park. (Results can be found here.)

Not only did snow present a challenge when running the race itself, one hurdle that locals had to overcome was physically getting to the race. Roads were in poor shape as heavy snowfall blanketed much of the city making commutes difficult. (See below, for example.)

I guess Mother Nature didn’t get the memo that SOMEONE is running a half marathon. You shat on my training in form of snow and ice for the last two months and here you go again, less than 24 hours before race time. I guess this just makes me a better Canadian… #hypothermichalf #womensrunningcommunity #canadianproblems #runningcommunity #marathontraining

Check out some of the photos from the Feb. 4 Hypothermic Half-Marathon from Vancouver. Got one that we missed? Tag @canadianrunning on Instagram.

Happy to be able to run, and happy to finish this difficult race on my own two feet. I have a bit of beef with 13.1 after today… already looking forward to more stable footing in my next race! #comebackstronger #beatyesterday #womensrunningcommunity #runeverydamnday #hypothermichalf

On this 4th day of February Valeria Kolesova run her first #halfmarathon. Her result was 2 hrs 31 min. I must say thinking that #ryangosling is waiting for you in the #hottub helped a lot during the race ? #vancouver #hypohalf #hypothermichalf #hypothermic #runningroom #runner #canada #running #vancouverrun #westcoast #westcoaster #race #runninggirl #runningtime #runningcommunity

This is #brutal: it’s #snowing like crazy and we have to run #hypothermichalf #Vancouver

It was #difficult, I was sweating, swearing and swelling, but I have #finished #hypothermichalf

That was a tough 21K in the snow. But I guess Vancouverites are used to rain, snow and ice. Beautiful trails were challenging but rewarding. #explorebc #hyperthermichalfmarathon #vancitylife

Just do it✔️even if it’s with two pairs of tights and 15cm of snow☃️?Even though this was my slowest half to date, it was also one of the most rewarding. Especially with the full white view throughout the whole run?