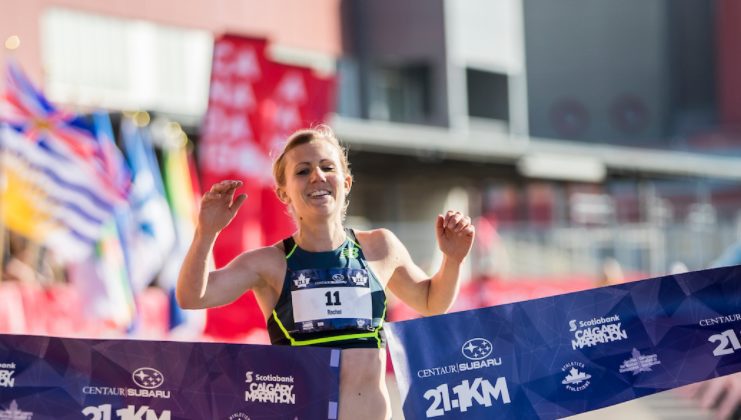 With your upcoming marathon now just weeks away, it’s time to focus your efforts and put in some solid training. Rachel Hannah has established herself as one of Canada’s top female marathoners with a personal best time of 2:32. She’ll be running the Berlin Marathon in mid-September and is training hard with the intention of returning to former fitness. We spoke to Hannah about her recommendation for a workout that goes the distance.

“Since I’ve started racing marathons, adding some tempo running to my long runs has become a weekly staple in my training,” says Hannah. These runs tend to be long, ranging from two and a half to almost three hours of continuous running. And unlike LSD–long, slow distance–running, these runs incorporate a substantial amount of quality as well. Hannah suggests running the first 30-45 minutes at a moderate pace which she describes as being about 60 seconds per km above (i.e. slower than) marathon race pace. This is then followed by 60-75 minutes at goal marathon race pace plus 5-10 seconds per km. It’s important to note that this pace is not meant to be exact but is rather a range that considers the weather, course and how you’re feeling on the day. To finish the run, Hannah does a further 30-45 minutes at “steady state” pace which is about 30-45 seconds per km above marathon race pace. Once again, this is ideally done in one, continuous run without stopping or rest breaks.

“These are big volume sessions that can cover 30 to 40+ km so I build up to them throughout the training season over many weeks with the peak volume effort coming six weeks before my goal marathon.” Hannah will complete this type of session once a week while training for a marathon, typically on a weekend when she has the most time, both to run and to sufficiently recover.

Asked why she recommends this type of effort, Hannah quickly states that these weekly sessions are the truest way of developing the ability to run for a sustained hard effort while running 2.5 hours or more. “I like to simulate the time I’ll be on my feet and it also helps me work on keeping my concentration for an extended period of time. It’s very much a race simulation and I also practice taking fluids and energy every 5K or so, just like I would during the marathon.”

RELATED: Fuel during your long run to get it right for race day

Hannah concludes by warning that this type of effort definitely requires building up to over time. “After I started running more seriously again after time away from the sport, it took me several years before I could handle the longer efforts.” For anyone doing a weekly long run of any duration, she strongly recommends inserting faster-paced tempo running within it. An easy and safe place to start could be a 15-minute tempo that increases by five minutes each week. However, Hannah suggests also taking a break every third or fourth week and just running your long run at an easy pace.