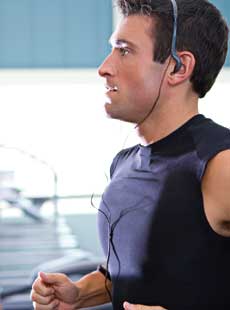 A growing number of runners choose to plug in while running and racing. And perhaps for good reason.

A small study out of Brazil saw some interesting results on how music affects race results. Published in the Journal of Strength and Conditioning Research, a small group of runners underwent five experimental conditions to assess running performance before, during and after a 5K race.

Results found that those who listened to music during the race, regardless if it was slow or fast, ran the first 800m faster than all other conditions. For the remainder of the race, everyone ran at about the same speed, but, due to their quick start, those listening to music improved their overall performance and ran a faster time. Those who listened to music before the race also ran a bit faster but to a much lesser degree.

Perhaps most interesting was that the fastest average time was run when participants listened to slower, albeit still motivational, music during the race. Another finding from the study was that listening to music after the race was able to speed up the time it took participants to return to a normal state which suggest that music may aid in the recovery process.

What this means for you? Regardless of how you feel about listening to music while running and racing, increasing evidence now suggests that music may be beneficial for running and racing. Listening to music before, during and perhaps even after a run or race, may provide improvements to performance, perceived difficulty and recovery. As long as you are comfortable and feel it is safe to do so, consider using music as part of your running and training.