As the 2010’s come to a close, we’ve reflected upon the most memorable moments of Canadian running in the past ten years. Here they are, from newest to oldest.

Gabriela Debues-Stafford’s entire year has been a memorable Canadian moment (breaking seven Canadian records in eight months is pretty impressive.) But her most memorable moment was when she ran under four minutes for the 1,500m for the first time this summer at the Zurich Diamond League.

She would later go on to run 3:56 in the World Championship 1,500m final, but her initial 3:59.59 put her, and Canada, on the international distance-running map. DeBues-Stafford currently sits in 21st on the 1,500m all-time list and is looking to make her way up the rankings en route to Tokyo 2020.

RELATED: Gabriela DeBues-Stafford is part of a historic era in women’s running

Mohammed Ahmed had famously been fourth is many big races: Diamond League events and the 2016 Olympics–he’d been so close so many times but was never able to make the podium. That all changed at the 2019 World Championships when he earned Canada’s (and his own) first-ever 5,000m medal on the track, securing third in the final.

That 5,000m involved a shocking number of pace changes for Ahmed. “I fell back and then re-accelerated to get into medal position–that’s something I’m really proud of. That last gear was born out of desire. From what I can recall, I thought about all of the times I staggered down the backstretch and finished fifth or sixth. I attacked it as hard as I could and I found something.”

Cam Levins, then 29, broke a record that had stood for many more years than he’d been alive. Levins crossed the line at the Scotiabank Toronto Waterfront Marathon to finish his debut in 2:09:25, 44 seconds ahead of the record set 43 years earlier by Jerome Drayton.

This was a record that many had hunted (Reid Coolsaet, Eric Gillis and Dylan Wykes in particular) but before Levins, no one had been able to knock it down. Since Levins’ remarkable performance a year and a half ago, Trevor Hofbauer ran an Olympic qualifying race which threatened the new mark. Hofbauer’s performance is further proof that when one major barrier falls, the subsequent ones fall quicker.

After being the bridesmaid to Lanni in 2013, DuChene got her glory unexpectedly at the 2018 Boston Marathon. The unlikely Canadian hero ran her way to a podium finish in some of the worst conditions that the race had ever seen. She finished third in 2:44:20 at age 41.

The biggest story of the 2016 Olympic Games was the bromance between Usain Bolt and his budding protege, Andre De Grasse.

The pair shared the 200m podium and Bolt capped off his individual races in Rio as the double-gold medallist yet again. Although there was a lot of hype around De Grasse after his surprising bronze at the IAAF World Champion in Beijing in 2015, no one could have predicted that he’d deliver to this degree in Rio.

He’s gone on to have consistently successful seasons, winning medals at the 2017 and 2019 World Championships.

Ed Whitlock defied expectations and ran a 3:56 marathon in 2016 at the Scotiabank Toronto Waterfront Marathon, breaking the men’s 85-89 world record by more than 30 minutes. The 85-year-old Milton, Ont. resident ran in a 30-year-old singlet and 15-year-old Brooks shoes that day.

Whitlock’s running accomplishments date much farther back than just his masters career. In his early days, he was one of London’s [England] most promising up-and-coming runners going up against Gordie Pirie, who went on to win Olympic silver in the men’s 5,000m in 1956, and Alan Turing, famous for decrypting Enigma code messages during the Second World War.


Lewis Kent made a big name for himself (and Canadian running) when he set the beer mile world record and eventually landed himself on the Ellen Show for his athleticism in 2015. Kent demonstrated (in front of a live audience) how to chug and run.

Kent’s record didn’t stand for long as fellow Canadian Corey Bellemore would eventually break the mark, running a 4:39 beer mile in 2016 to become the fastest in the world.

At the 2015 World Championships in Beijing, Melissa Bishop looked extremely strong. In the semi-final, she beat the most feared in the world, Eunice Sum of Kenya, and the eventual world champion, Marina Arzamasova of Belarus. In the process, Bishop set a (then) national record of 1:57.52. She’s since lowered her national record to 1:57.01.

Note: Arzamasova has since been given a provisional suspension by the AIU (Athletics Integrity Unit) for violating IAAF anti-doping rules. The Belarusian athlete’s suspension is for Ligandrol, which is reportedly often used in supplements by body builders. It’s designed to build muscle mass with fewer side effects than steroids. 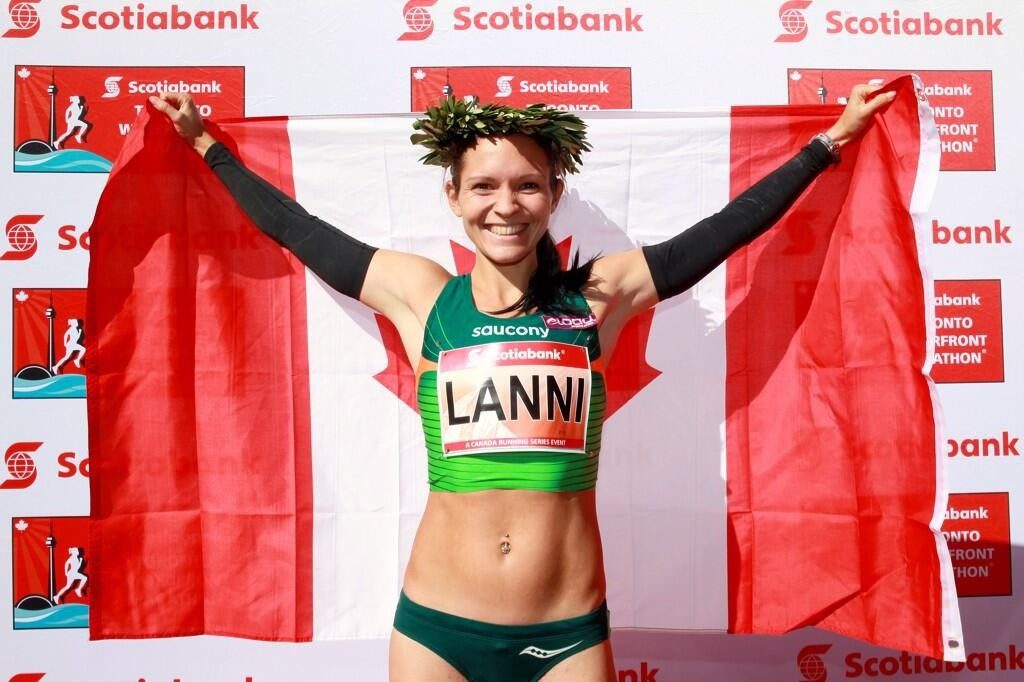 Lanni Marchant ran 2:28:00 at 2013 at the Scotiabank Toronto Waterfront Marathon to set a new Canadian marathon record. Marchant’s record has since been broken by Rachel Cliff, but Marchant is on this list because her record was set on home soil.

Marchant’s time put Canadian women on the map. The record that seemed completely out of reach for Canadians for 28 years was broken by both Marchant and Krista DuChene in Toronto in the same race. Cliff’s time is faster, and a truly world-class performance, but arguably Marchant’s performance paved the way and helped make Cliff’s record possible. 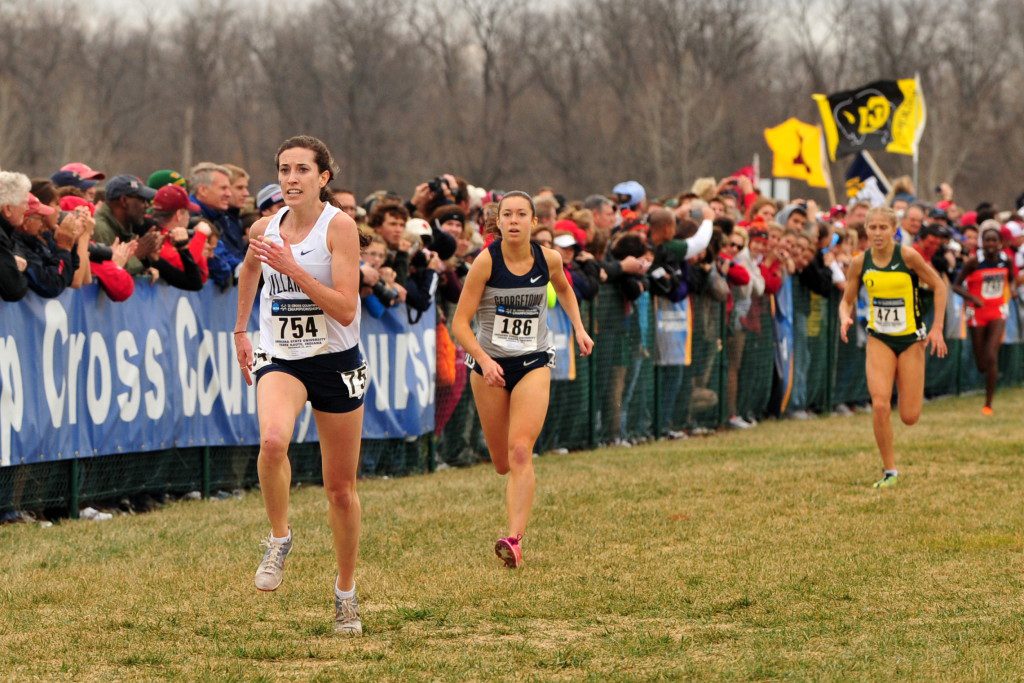 The NCAA Cross-Country Championships are one of the most competitive races on the planet. You’re putting every talented NCAA runner from the 1,500m through the 10,000m in one race to see who comes out on top.

Winning this particular championship means that you’re one of the strongest runners in North America and Canadian Sheila Reid did it not once, but twice. The Toronto native took home the individual title two times, and was actually voted NCAA cross-country runner of the decade by LetsRun. She beat out running names like the second-fastest marathoner in American history, Jordan Hasay, to take the LetsRun win.

Honourable mention: Gary Robbins at the Barkley Marathons in 2018

Robbins was done in by some of the worst weather ever the event has ever seen at the 2018 Barkley Marathons. Though he completed what is known as a ‘fun run’ (three 20-mile loops in less than 40 hours), Robbins was tapped out as he missed the 36-hour cut-off to be eligible to continue onto the fourth (of five) loops of the event.

While he was unsuccessful in his completion of the race, his run was one that captivated Canadians, thus earning his honourable mention status.