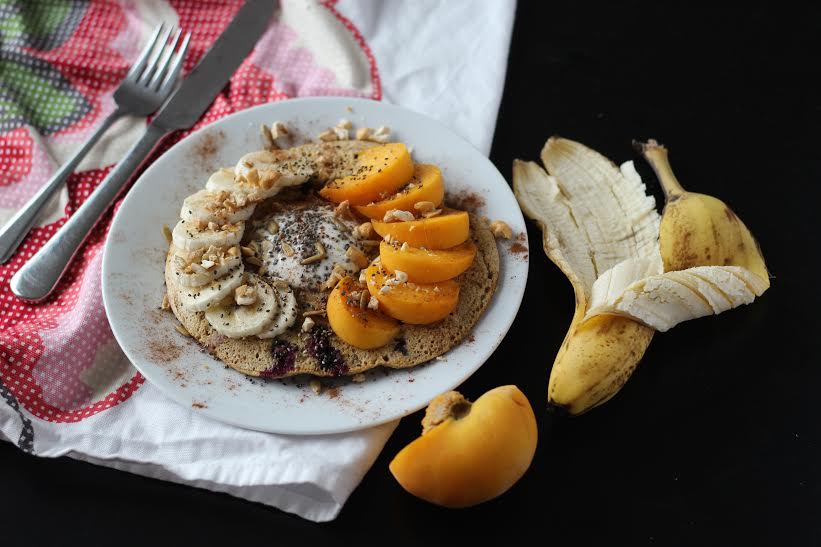 Growing up, I was not a morning person. For years, I was a miserable human being first thing when I woke up. Fast-forward 10 years and I now wake up at ungodly hours– and actually love it. During the time when getting out of bed was the hardest part of my day, there was one thing that would brighten my mood: pancakes. It was always the best day if my Mom would come into my room to wake me up and ask if I wanted pancakes for breakfast. She would make perfect little pancakes so we could have a few for breakfast and then there would be some leftovers for snacks after school. We still can’t decide if hot pancakes with syrup, bananas and pecans are the best, or if cold pancakes with butter are better. It’s an ongoing debate.

Breakfast is still my favourite meal – I just eat it hours earlier than I did as a child. The only downside is that I don’t wake up to my mom having made my pancakes for me, I have to do it myself. In an effort to increase my daily protein intake, I look for various ways I can incorporate protein-rich foods into every meal. For pancakes, I opt for chickpea/garbanzo bean flour. Chickpea flour is a fair bit denser than regular white flour and so these pancakes don’t have the traditional fluffiness to them, but top them off with plain Greek yogurt and fruit and it doesn’t even matter! Not only does it have higher protein content, it’s a wee bit healthier than having them doused in maple syrup.

2. In a small bowl, whisk together the chickpea flour, cinnamon, salt, and baking powder.

3. Add the water and whisk well until no clumps remain. I like to whisk it for a good 15 seconds to create lots of air bubbles in the batter.

4. Stir in the blueberries.

5. When the skillet is pre-heated (a drop of water should sizzle on the pan), spray it liberally with olive oil or other non-stick cooking spray.

6. Pour on all of the batter and quickly spread it out all over the pan. Cook for about four to five minutes (timing will depend on how hot your pan is), until you can easily slide a pancake flipper or spatula under the pancake and it’s firm enough to not break when flipping. Carefully flip the pancake and cook for another four to five minutes, until lightly golden. Be sure to cook for enough time as this pancake takes much longer to cook compared to regular pancakes.

7. Serve on a large plate and top with your desired toppings.